Time marches on at Ram Quarter

As part of the ongoing works and improvements at Ram Quarter, the old stable clock - after having stood silent for many years - will start to tell the time again.

Its return to time-keeping will be a symbolic recognition of the completion of Phase One at Ram Quarter, Greenland’s award-winning redevelopment and regeneration of the former Young’s Brewery at the heart of Wandsworth.

The clock-tower has already been refurbished as part of the current programme of works to make the listed stable building wind- and water-tight before the next stage in its long history.  Originally running on a clockwork mechanism, the clock had become powered by electricity when the Brewery closed, but during the cleaning of the interior of the tower the clock’s original works were discovered hiding under decades of dust and ancient cobwebs.

It turns out to be a little piece of local history.  It was made by Spikins, the only known clockmaker in Wandsworth, founded by William Spikins, “Chronometer Maker to Her Majesty”, who traded from 123 Wandsworth High Street as both horologist and optician.  The date of manufacture is not yet certain but it seems likely to have been in the 1880s.  Thus it has marked time since the reign of Queen Victoria, through the reigns of five further monarchs, during two World Wars and the bombing of Wandsworth, since not many years after lavender was grown commercially in the fields of Lavender Hill and Lavender Sweep, and Betjeman’s “lugubrious” Wandle was one of the most famous trout streams in the country.  It has watched over Armoury Way since traffic was entirely horse-drawn, and seen the first motor car (widely welcomed as a way of keeping the streets clean from horse manure), the arrival of the A3 and the multi-lane one-way gyratory system, and more recently the first electric car and hydrogen-powered bus.

The future of the clock mechanism has not yet been decided.  It is hoped that the clock’s works may eventually find a home for public display at Ram Quarter.

For the next few months the old stables, former home to the shire horses that pulled the Young’s drays and to the geese that deterred potential burglars, will be open to the public, together with the nanobrewery established there by John Hatch, former Young’s brewer.  John will give guided tours and will bring to life, in his inimitable way, the stables and the brewery and their extraordinary and varied history. 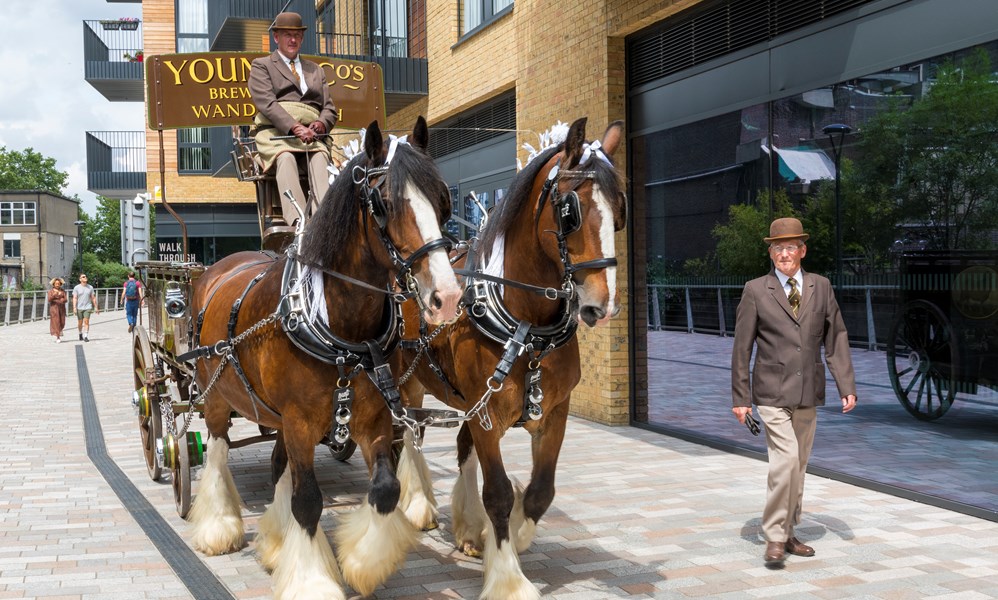