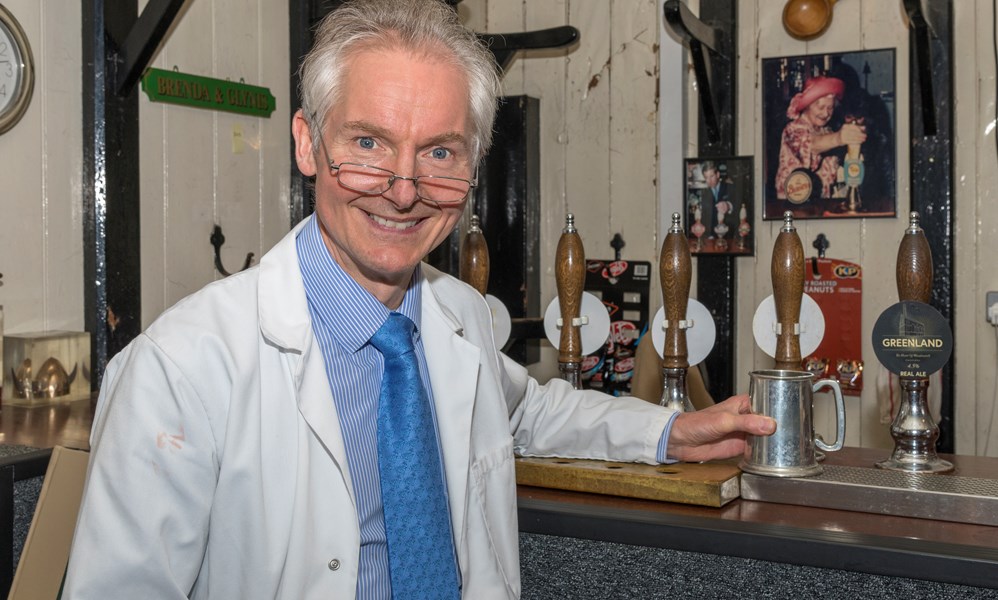 I am one of the happiest brewers in the country, and must have one of the most varied and interesting jobs.  Until 2006 I worked for one of the UK’s best-known breweries – Young’s – which held two outstanding records.  Firstly, it had won more medals than any other brewery in the history of the Brewing Industry International Awards competition, so it could be said to have been the best brewery in the world.  Secondly, by virtue of the site it occupied, it was in the fortuitous position of being custodian of Britain’s longest continuously brewing site, where brewing was traceable in an unbroken line back to at least 1533 when Henry VIII was king of England!  Young’s brewery in Wandsworth was a wonderful place, often likened to Willy Wonka’s Chocolate Factory, with a menagerie of animals including geese and shire horses, and a marvellous mix of Victorian and state-of-the-art technology – and buildings to match.  It was also full of amazing characters, none more so than John Young himself, the company Chairman.  John Young was a bit of a hero to me because he had singlehandedly campaigned against keg beer in the 1960s, protesting that cask ale was better.  He carved his niche, and cask ale is my own passion too, so it was a dream come true as a young man when I became one of John Young’s brewers.

In 2006, it was a sad day for all of us at Young’s when the company announced that it intended to close the brewery later that year and move brewing to a new site: not only was my own eighteen year career on site set to be cut short, but Britain’s oldest continuously operating brewery was going to lose its unbroken line to the present day.  This was unthinkable!  I set my mind to finding ways to keep brewing going, although I had no idea how I would achieve it.  As Young’s was approaching its final brew in Wandsworth, I promised John Young that I would do my best to maintain brewing on site, and this is what I have tried to do ever since.  Incidentally, John Young died the very day before the final Young’s brew in Wandsworth.

Luckily for me, I was given the role of Health & Safety Advisor for Decommissioning at the Young’s brewery, which allowed me to remain on site after brewing ceased.  It was then that I mooted the plan to build a nanobrewery out of scrap metal from the old Young’s equipment.  In this way I have managed to brew at least once a week since Young’s left the site, and I have continued to keep meticulous records in Brewing Books, as per site tradition, to demonstrate the brewing continuity up until today.

Keeping brewing going was always going to be a task when the site was destined to become a building site.  The first hurdle was that I had to move the new nanobrewery out of the old Laboratory building, where we originally sited it, because the building was scheduled for demolition.  Greenland carefully created a purpose-built brewing area inside the shell of the 1896 stable building which was clean and sterile and made to measure.  The nanobrewery was then taken down the yard in a wheelbarrow and set up as new.  Of course we had to schedule the move so that it took place in between brews, to ensure that our record did not falter.  The site power then had to be cut off as the demolition work continued, so we relied on a generator to keep us brewing.  The most daunting problem for me was trying to keep the brewery clean while in the middle of a building site.  I put detergent footbaths outside the stable door for us to wash the mud off our boots.  Of course, having builders around had its advantages too: when my extractor fan broke and the brewery began filling with steam and condensation, the builders came to the rescue by fabricating a brilliant temporary solution – using a traffic cone and duct tape! – until they sourced a more suitable replacement.

With the brewery now running smoothly, and a constant power supply connected, I was able to relax a little and think about being experimental with the beer rather than just keeping it going.  Following a series of wacky commissions, quirky suggestions, and other ideas that had lain dormant in the back of my mind, I started to produce some interesting flavours.  I have used coffee, spinach, black garlic and cardamom pods to name but a few.  Greenland has even commissioned a brew: a very traditional 4.5% English pale ale – with a slightly darker colour and a nuttier flavour – which we named “Greenland Ale”.  My longest running beer, and by far my most popular, is called “Wandsworth Phoenix” which is a 4.3% traditional English pale ale using Maris Otter barley and Goldings hops.  Just typing the name makes me feel thirsty!

My Ram adventure has been ongoing for more than thirty years now, and it has been very exciting to see the site transform into Ram Quarter over the last few years.  I cannot wait to see what happens next.

John Hatch came to work at Young’s Ram Brewery in 1988.  He has remained on site ever since, and helped keep the brewing legacy alive following Young’s sale of the site in 2006 and throughout all the more recent construction of Ram Quarter.